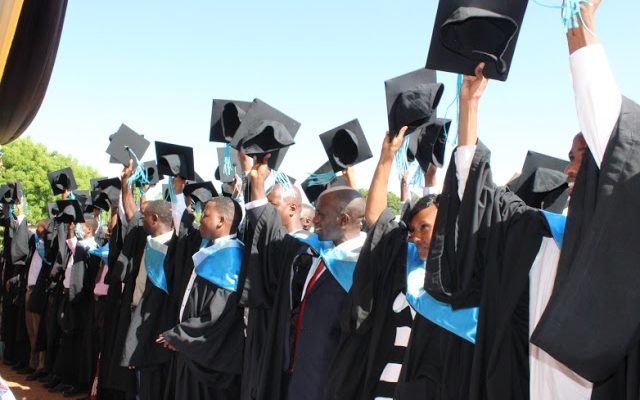 One may most likely come across young men and women who are looking for jobs in Tanzania major cities like Dar es Salaam, Mwanza, Arusha, Zanzibar, Dodoma and Mbeya.

Such young men and women start movements after graduating from both public and private universities currently established in different corners of the country.

I wish such graduates may learn from Gandu from Mkuu Division, Rombo District in Kilimanjaro Region who I think is a vivid example of a graduate from a higher learning institute who is self employed.

This young man reached that stage after exploiting his talents to start an income generating project in Dar es Salaam. Having graduated with a Masters Degree in Petroleum Engineering Science at the University of Aberdeen in Scotland, United Kingdom, Gandu returned home and started pondering what to do next, while eagerly waiting for employment chances to enable him practice what he had studied overseas.

Being the firstborn in the family of three children, Gandu says that he had to struggle to get some income to support his wife and two children born before he secured the scholarship to study in the United Kingdom, sponsored by an oil and gas giant, Shell.

Having studied electro-mechanics at the University of Dar Es Salaam in 2008, Gandu was lucky to secure two job opportunities right after graduation, but strangely he turned both opportunities down because he thought they couldn’t help him develop his career effectively.

“I was employed by Serena Hotels who even gave me an internship in Nairobi but I later refused to work at their hotel in Serengeti, because I found the place blocking me from other opportunities. Working in an urban setting was a better option for me,” he says.

Gandu once attended the Shell alumni annual gathering, when he recounted an interesting experience before his fellow alumni, who have also been sponsored by BG Tanzania (now Shell Tanzania) to pursue further studies in Oil and Gas both within and outside Tanzania.

This petroleum engineering expert who managed to score two As, and one B in his 2002 Advanced Level Secondary Education examinations at Old Moshi Secondary School once thought of studying business studies, so that he could be employed by TRA.

In his own words, Gandu says that at that time the only employment young men and women dreamt of was to work at TRA, simply because there were opportunities for one to transform himself or herself quickly. Besides going to the UK to advance his academic career, Gandu had the interest learning how people in Europe strive to improve their lives economically.

In order to improve himself economically, he did manage to secure a part-time job that paid him 400 British pounds a week, which was by then equal to 1,105,000/- Tanzania shillings. But what does Gandu do currently? This 30-year-old man is self-employed, doing something that comes from a personal initiative that every skilled person would have ventured into.

He runs a modern automobile garage and lubrication facility at Tangi Bovu, Mbezi Beach in Dar es Salaam, where he has employed five young mechanics. “Having seen that idle land, I decided to approach the owner who leased it to me, and now I am making good money there. I am also planning to expand this business in future while still eying gas and oil job opportunities” says Gandu.

Gandu says that his garage established six months ago is attracting more customers because it responds to quality services delivered with committed staff. Miranda Naiman, visionary founder and Managing Director of Empower Limited who also addressed the BG (Shell) beneficiaries, some of who have not secured formal employment, called on Shell Alumni to identify opportunities around them which will help them start generating some income.

“Try, do something. Think outside the box and start with something you love doing. Replace your fear with curiosity, believing that knowledge is power,” she told Shell Alumni as they keenly listened.

During the event, Patricia , External Relations Manager at Shell Tanzania said her company is committed to supporting institutional capacity building and skills development programmes in Tanzania.

“After sponsoring the young Tanzanians, we like to follow up to see how the training has impacted their lives and career. This is why we are happy to stay in touch with all those that we can reach,” she says.

Marc den Hartog Managing Director at Shell Tanzania remains optimistic that Tanzania’s economy will improve extensively if the LNG project is successful in Tanzania. “More investment is still needed to this project effectively and the negotiations with the Government through Tanzania Petroleum Development Corporation (TPDC) are in progress,” he says.

The beneficiaries were thrilled by the experience shared by Erick Chonjo, Eco Homes Chief Executive Officer (CEO), who recounted to them his success story that began as an ordinary clerk earning 350,000/- a month 10 years ago, to his current status as a billionaire currently involved in real estate business.

Graduates should not just walk around with their certificates searching for jobs, but try to explore opportunities around them and eventually get self-employed.