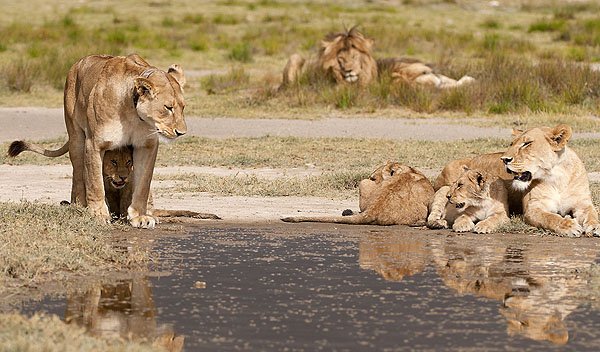 THE term union can be broadly defined by this pride of lions.

Stories of orphans being mistreated by their relatives after the death of their biological mother.

However things are totally different in the savannah where a unique culture designed thousands of years ago is making a difference.

In common language the word allomothering is very ambiguous and non grammatical meanwhile among scientists the term stands for a unique culture that is found in the savannah especially mammals such as elephant.

Whereby a mother takes care of non maternal-infant. This is an exceptional commitment that includes carrying, feeding, grooming, touching, nursing and protecting the infant against predators.

Being one of prominent members of group of mammals, primate females endure six months of gestation period which is rewarded with an infant which starts its life while depending on supply of milk from its mother.

Among vervet monkey communities females remain in natal groups whereby hierarchies are established according to the maternal social status of an individual’s mother.

Vervet monkeys live in social groups made by individuals ranging from 10 to 70, right from the beginning of their life each female member is taught a unique way of taking care of each other.

This is what zoologists call allomothering a process whereby another female apart from the biological mother takes care of an infant.

Throughout the savannah this is the only one of its kind whereby all members of the group through one 30 different calls are tremendously informed the arrival of a beautiful infant.

From that point, it’s the responsibility of every female member to pay a visit to see, inspect, admire the beauty of the baby before accepting it into the group.

This process is very complicated because it involves a high level of intelligence among these primates whereby an individual will pay a unique attention on the baby by sniffing and touching it before accepting the baby from one of their sister, aunt or cousin.

This is done because all members of the group are involved in the infant care and uniquely juvenile females assume the responsibility and allow their mothers to do other energy demanding duties.

Among vervet monkeys this process is used to teach young female members how to take care of their own infant and became very successful in a very challenging environment.

It is during this period when juvenile female members are taught how to discriminate the infants in the group according to social status.

On their side, economists say the process of allomothering plays a very important role among these primates because a mother decreases her own investment in taking care of the infant.

Vervet monkeys are herbivorous living mostly on wild fruits, flowers, leaves, seeds and seed pods which make them to spend most of their time on trees where few predators such as leopards, eagles, pythons and baboons are able to target and capture them. Because of weight lions are not able to hunt these fast-moving primates.

Meanwhile after giving birth mammals need to be tolerant, because after a gestation period of 110 days, a lioness is required to work very hard to protect her cubs which open their eyes after seven days. During their earlier days lions cubs are not able to walk.

This is a weakness which force the lioness to carry them from one point to another whenever she wants to move.

Not only that, also for six to eight weeks the lioness will hide her cubs into a cave where they will continue to depend on her for the supply of milk because at this stage their digestion systems are very weak to deal with meat.

Lionesses do most of their duties together ranging from hunting, defending their family or pride, feeding and taking care of their new born. Normally a group or pride consists of about six to ten lionesses which live with one or two brothers as pride owners whose main duties are breeding and defending the pride against others.

As the birthday approaches lioness will separate itself from other member of the pride and go into a hiding place where one to six cubs are born, when more than two cubs are born the lioness will sniff to choose those with more chance to live and take them in a special place leaving the weaker to die because of hunger and thirsty.

Before human eyes this is high level of cruelty but on her side the lioness do that to create more time and resources for those who can face the challenges of the savannah.

The mother will visit her fellow members to check if the youngest cubs in the pride are more than three months old if the chance is not available she will keep her own cubs away until time allows.

Zoologists say the main reason for this act is peace and stability within the pride which enable all lactating lionesses to milk the cubs indiscriminately. This culture has its own problems whereby the young and weak ones lose their chance of feeding on nutritious early milk important for building strong bones.

Once the cubs are strong enough the mother will lead them into the pride land where they will join their relatives like their sister, brother, and father.

This is the most dangerous time of their new life because in the group there might be young lions who are not used to cubs so they may kill them as prey.

Unlike males, young lionesses are taught how to take care cubs on the arrival of these new cubs in the pride while older one goes away for hunting.

Normally within a pride lionesses give birth at a different time with two or three in an interval of time allowing the rest of the team to carry on with other duties.

During that time grownup lionesses may stay back to take care of the cubs by playing with them.

While the lactating lioness may stay back to defend and assist the young female in taking care of the youngster.

Lions have a well-organized family tie when there is no young female in the pride a sick or weak female will stay back to do the job of nursing the cubs while others goes out to fetch food for the whole group.

If there is no sick member and availability of food within the same area is good one lioness may be asked to stay back to take care of the cubs while the rest go out for hunting.

It is said that this mother may show a very little favoritism to her own cubs, zoologists say, unlike vervet monkeys community which have social status lions lead a communal life.

If one lioness is sick and cannot hunt it will be cared by her sister if she dies her cubs will be adopted by other members of the pride without discrimination.

While the cubs are in the pride there is a lot of challenges but the most dangerous time is when there is pride takeover where a new lion or lions who is not their father overthrow the pride owner.

Meanwhile, in the wild because of their size, adult elephants are not preyed by any other animals.

Man is the only predator and enemy of the biggest land dwellers, according to different reports, for the past 40 years, Africa has lost 50 percent of elephants roaming in the jungle south of the Sahara desert.

This is a devastating situation whereby 8 to 12 percent of the dwindling population is killed through bullets fired by ruthless poachers who are fueled by a lucrative market Asia.

These evil acts does not only kill elderly elephants who carry tusks but also leave innocent baby elephants as orphans in the jungle who are prone for attacks from crocodiles, lions and African hunting dogs.

Before adulthood some baby elephants fall victims of well organized attacks from lions who are capable of frustrating a weak, inexperienced and lonely mother elephant.

This is possible through separating the baby elephants from its mother who may flee from the place leaving her baby at the great danger of being killed by super predators of the savannah.

Faced by different problems, to avoid total extinction scientists say female elephants have developed special mechanism called all mothering which provides opportunities for orphaned baby elephants to be adopted by other mothers.

This is a vital job which falls on the trunk of a strong matriarch leader of almost every elephant group in the tropical savannah of Africa.

Throughout the savannah, among elephants, this is a shared responsibility which involves a mechanism that allows an orphaned baby elephant to suckle from any milking mother within the family.