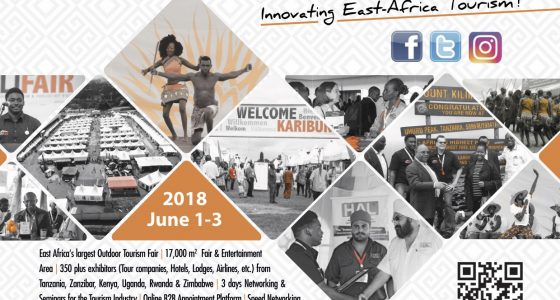 Karibu Tourism Trade Fair, scheduled for next month, is set to attract over 4,000 participants, an increase of 25 percent, organizing officials have said.

The Co-Director of the Kili fair Promotion Company, Dominic Shoo, has acknowledged that at least 400 participants from more than 40 countries worldwide are expected to attend, an increase from over 300 last year from a little over 10 countries.

Karibu / Kilifair Tourism Trade Fair that, which will be held at the Moshi Co-operative University (MoCU) grounds in Moshi, is slated for June 1 – 3.

The number of participants is also scheduled to increase by 25 percent; this has led to the increase in the fair and entertainment area by 3,000 square meters, acknowledged Tom Kunkler, Kilifair Co-Director. Karibu Tourism Trade Fair has become the biggest and most important in boosting tourism industry for Tanzania in particular and Rast African region as a whole.

The Minister for Natural Resources, Dr. Hamis Kingwangalla, is expected to officiate at this year’s trade fair. An official at the Ethiopian Airline offices in Arusha said her company would continue to partner with Karibu /Kilifair in improving the tourism sector in Tanzania.

“Our 100 destinations worldwide, 58 of them in the African continent, make us one of the airlines, which can reach many people who can learn more about Tanzania’s touristic potentials”, she said.

The Company’s Chief Executive Officer, Ivan Braun, said that during the exhibition, people would be able to learn how the company works on its operations.

He said the company was the first company specializing in rescue operations to mountain climbers, replacing manual evacuation by modern specialized helicopters.

We introduced this rescue service to make Tanzania the safest tourist destination especially to those who come to climb Mount Kilimanjaro,” he said.

According to him, the introduction of the search and rescue service on Mount Kilimanjaro would increase the number of tourists who would be sure of their safety when climbing Africa’s highest peak.

“We are an upcoming organization with a keen focus on helicopter operations, specializing in search and rescue services, starting with Mount Kilimanjaro and Mount Meru. We have committed ourselves to a five minute response time from the minute we receive a distress call,” he said.