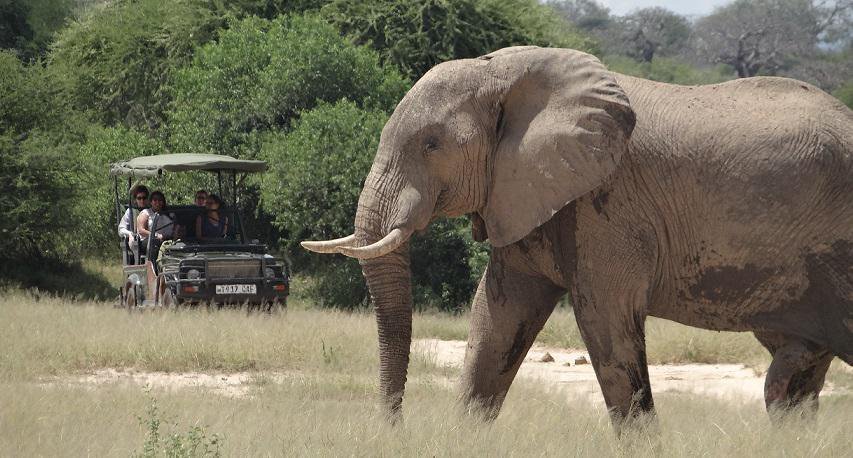 Among mammals and other vertebrates, the main function of an ear is to collect auditory waves before passing them into the brain for analysis and response through different actions; this is done through the pinna or auricle, which is the visible part of the ear which traces sound waves through the ear canal toward the eardrum.

Standing between 2.7 and 3.7 meters, while weighing more than 7,500 kilograms, the body of an African bush elephant may grow more than 3 meters long, which makes the mammal to be the largest terrestrial animal in the world, with the largest auricle too.

With bodies measuring from 2.6 to 34 meters long, whales are the largest animals in the world, but for smooth movement in the water, they don’t have auricles, while living in the tropical savannah an elephant needs an auricle for different usage.

With its enormous body, there are many reasons for the elephant to have the largest auricle that measures between 60 by 30 centimeters and 183 by 114 centimeters, which surpass all sizes of ears in the entire world. One may ask what the usage of this giant ear is.

The huge size of the elephant’s ear was the main factor behind one interesting fiction about seven blind people, but today in Loliondo, Dukambovu, Bariadi, and Lalagwe, people compare it with the largest bed sheet from Manzese, Tandika, Kariakoo and other shopping centres in Tanzania, where it trades under the name of six by six.

With bigger bodies, their upper part has the largest section which is exposed to the harmful sun rays and makes their lives to be prone for different complications which may be caused by the rise of body temperatures such as muscle expansion and heart failure, which send the victim into a sudden death.

To cope with harsh tropical temperature, the creator equipped these giants with different mechanisms which enable them to thrive even in the middle of Kalahari Desert, where the sky is almost open throughout the day, pushing temperature levels between 45 °C (113 °F) and 50 °C (122 °F), which is one of the highest in the whole world.

This is possible because their average body temperature is 35.9 °C (97 °F), but what is important here is like all mammals, an elephant can raise or lower its temperature a few degrees from the average in response to extreme environmental conditions.

Compared to other animals of the savannah, an elephant has a unique skin which is designed for this kind of environment,
because in most parts its width is 3.8 with small wrinkles which fold up and down to countercheck the strength of sunrays from the sky, but this mechanism depends mostly on the presence of huge ears.

Scientists say during rainy seasons, the small wrinkles trap a good amount of moisture which is stored, that is why these giants change their color from brown to dark brown during wet seasons or vice versa during drought.

At midday when the level of temperature is higher, an expansion mechanism on the skin seals the wrinkles and stop evaporation, but at the same time, the moisture is used to absorb heat from neighboring parts and protect this mammal that stands up to 4 meters tall.

This is a superb mechanism which effectively protects an elephant than other animals in the savannah which are forced to retreat under trees for protection during mid-day when the sun rays become very harsh.

Scientists say the effectiveness of this mechanism depends on the presence of large ears on the elephant’s body, the outer part of an ear which is also known as auricle is covered by hairy skin which is 2.5 centimeters thick, which enables it to flex itself to track sound waves into the ear canal.

On the other side during mid-day when the level of temperature is higher, avian open and extend wings to allow their bodies to release a certain amount of heat while African wild dogs open mouth and push their tongue out to release temperature out and allow fresh and cool air in.

African wild dogs are able to do this because their respiratory system is built with muscles which work in conjunction with Pleural cavity to allow expansion of the chest and let fresh air to pass into the air storage.

Elephants don’t have the Pleural cavity instead, their lungs are connected directly with the chest which enables them to reduce duration of breathing and release temperature out from the largest body in the savannah.

By using sweat, a human body release temperature through pores or small outlets on the skin, but with isolated hair on its skin, the elephant’s body is unable to use this mechanism and avoid a sudden death when temperature level is higher during mid-day, this giant use its big ears as large fans to control heat in and around its body.

Through flapping of their large ear rhythmically, elephants are able to collect enough fresh air, but to do this, the big mammal is required to use its brain to detect a good direction of the wind which will allow its auricle to truck fresh air capable to cool its body by 5° C or 9°.

By flapping its big ears up and down, an elephant removes hot air around its body mechanically, meanwhile, scientists say the under part of this largest auricle is covered by smooth skin which reduces friction between the wrinkles and allow the ears to operate smoothly as a fan for the elephant.

Scientists say the under part is also equipped with a network of bloody capillaries which distribute different materials in liquid form. During the flapping of the big ears, elephants cool down a good amount of blood on auricle which then is pumped into different parts to create a conducive atmosphere inside its body and enables it to thrive even in the middle of the Kalahari Desert.

Large ears are very important for the existence of elephants, because during long dry seasons when temperature level is high, these animals will flap their auricle to cool the moisture which is trapped between the wrinkles, which then pass cold electrical waves deep into their bodies.

This is an electrochemical process which is enabled by the presence of sensory glands under the 2.5 centimeters thick elephant’s skin which allow the cooled waves to pass into the body.

Scientists say among different factors, length and width of one ear plays an important role during this process. Among elephants,
the Asian species has the smallest body while the African forest elephant has medium-sized body and the African savannah elephant has the largest body with biggest ears which are designed for this environment.

The large size of an elephant’s ears comes with the ability to perform different functions, this mammal uses its large auricle to express its different feelings, this includes happiness and anger, but when the animal hold its ears higher as it is going to attack an enemy, by doing this an elephant will look bigger and intimidate its opponent.

A baby elephant will experience its obedience to the matriarch female and other elders in the herd by holding down its ears while bowing down, stubborn members may express their anger by erecting their ears to form a V figure.

Scientists say tusks and trunks are used by people to differentiate this mammal from others in the savannah, but large ears are used by an elephant to change its size and shape.

Elephants live in a herd led by a matriarch female who controls all members and work very hard to take care of each other. the rise of poaching activities in different parts of Africa has put this mammal in great dangers of being pushed into extinct.

Through its different organs, the government is working very hard to protect elephant and other animals in national parks, game reserves and other protected areas, but your support is important for the success of this important mission.

The presence of elephants and other big mammals in national parks such as Katavi, Serengeti, Tarangire, Manyara, Mikumi, Ruaha and Ngorongoro attracts tourists from different countries to Tanzania.