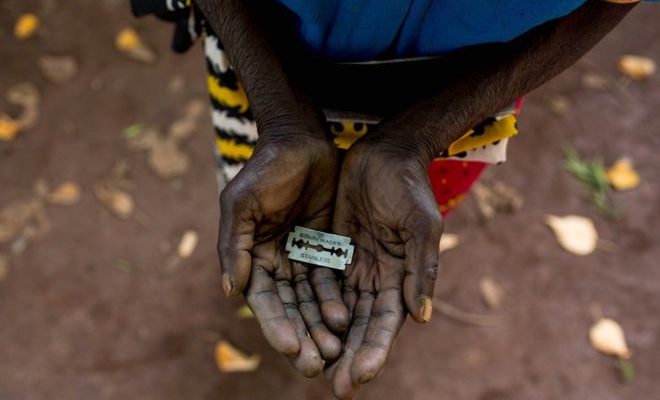 Female Genital Mutilation (FGM) is a traditional practice that is widely spread among tribes in East African societies and has been practiced in this region for a long time ago.

It is primarily a cultural practice, not a religious practice although some religions do include FGM as a part of their practices. This practice is so well ingrained in the tribes that assure a belief that girls will not become women without this procedure.

In communities that support FGM for example, it is and compulsory procedure for every woman and it is one of the very important stages in women’s and must be observed.

Last year, Dr. Mari Okumura from Japan conducted a research on FGM and the people’s reactions associated with the practice. In her observations, she established a very high prevalence rate of FGM in some parts of Kenya, Tanzania and few cases in Uganda.

She revealed that the decision to circumcise is parental and a societal matter. Elders in these communities are the worst enemies in ending FGM. They attend training on the impacts of FGM but once they walk out, they are back to the practice.

While in Migori areas in Kenya, the researcher observed public ceremonies celebrating the FGM season whereby hunSnapshot of FGM practices and interventions dreds of girls were circumcised. She witnessed groups of armed men going door-to-door harassing the families of uncircumcised girls.

Girls are being paraded openly in the streets, wearing the celebration hats as a sign, as the community members sing and dance on public roads in celebration.

“I have counted more than 300 helpless girls in the past week alone,” she added. Ceremonies started secretly, she added, with some girls being taken in the early hours, but when they realized no action was being taken to stop them, it became full-blown and very public.

In Elgeyo Marakwet County of Kenya, Dr. Okumura was told by the elders, the incidence in which two police officers, Captain Orengo, Sergeant Mutua were severely injured by the village members when attempting to stop villagers from conducting the exercise in an open area without any sense of fear from the government.

Even after the threat and the beatings, the process moved on and everyone in the community was happy and enjoyed the practice with no fear from the authorities. In Tanzania, she found that the season for circumcision was high that every woman who secretly escaped the cutting was put into the cutting.

These tribal elders looked to be strong believers of this practice. They revealed that a woman at any age provided is not circumcised, must do the cutting with absolutely no excuse.

If it happens that a woman died uncircumcised, she must be circumcised before being buried. When asked about their daughters, who escaped to safe houses from the procedure, they openly stated that, “we will not get tired of searching for them, day and night. We will one day catch them and bring them back to face the traditional norms.

“They cannot continue to be called our daughters if they remain uncircumcised. Let them know that there is no room for dirty and uncircumcised women in our family, our tradition and in our tribe.”

Two of these elders named their daughters namely Monica, Claudia, Bokke, Nyanchege, and Jilly who vanished trying to avoid the knife. In Karamoja areas of Eastern Uganda, the researcher was puzzled by 20 years old Emojong Ngimong who was begging her mother to be circumcised. “All my friends have had it done and I don’t want to be the odd one out,” she pleaded! I am isolated, at school, at the playground, and in groups. No man is ready to marry me in my entire society.

Emojung just arrived from Kampala where she has long been living with her aunt, hence avoiding the practice. Her mother, Maria , a mother of six is buying time while waiting for this year’s session to honor her daughter’s request.

Governments in East African countries have taken stringent steps to eliminate the FGM in their region. There are campaigns via radios and TVs, researches and direct educations that are going on to these societies to discourage the practice in Nyanza region of Kenya, Mara Arusha regions in Tanzania and in Karamojong areas of Uganda.

These steps include passing laws criminalizing FGM and the use of civil remedies and administered regulations to prevent the practice from continuation.

A growing number of African countries have enacted national laws outlawing female genital mutilation. There are a number of NGOs and civil societies that are working hand in hand with East African governments to help in the campaign against the cultural practice.

“We have engaged the radios, TV, community and religious leaders who are currently convincing communities that FGM has a medical effect in our women and girls and hence must be stopped,” said Koronya from the Maasai tribe in Tanzania.

Conclusively, it has been a tough practice to abolish the FGM from these societies while the government interventions are working day and night in ensuring that the practice is eradicated.

While the outcome will not be felt today or tomorrow, with what is going on right now, the FGM will one day die and get eliminated from the East African societies.

The researcher indicated that developed countries should assist the East African countries to fight against FGM the same way as they have helped in assisting to fight other chronic problems like HIV– AIDS, Ebola, epidemic, poverty, ignorance and good governance so that these societies become a better place to live