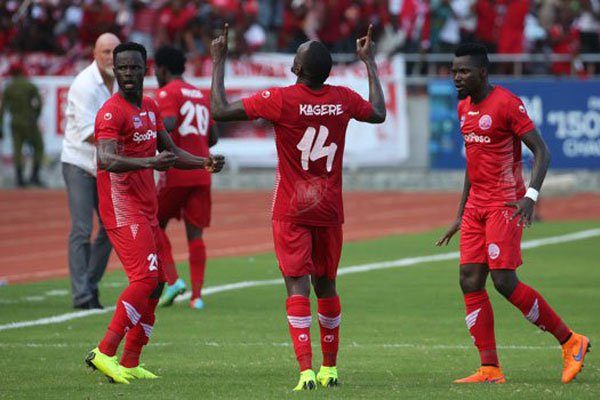 We are always told that upsets are part of soccer. You can make predictions, but it is always the outcome of the match which determines the results, when the final whistle blows, and not ball possession, corners or free kicks that decide if a match is won, drawn of lost.

In the English 2016 English Premier League, one of the teams which was considered as among the teams which will succeed in avoiding relegation was Leicester City, and they did it with excellent results.

They ended the series with 71 points, 10 ahead of runners up Arsenal, followed by Tottenham (70), Manchester City and Manchester United both with 66 points.

In the Africa Football Confederation (CAF) Champions League, Simba were beaten 5-0 by AS Vita of the Democratic Republic of Congo and by the same margin by Al Ahly of Egypt in an away match of their group.

But playing against all the odds, it emerged to fight like an injured hungry lion and pulled through a slim, but very impressive lone goal when they met Al Ahly in Dar es Salaam last Tuesday.

There may be those who can describe Simba’s 1-0 victory against the Egyptians who are on top of the latest CAF club rankings with 1625 points followed by TP Mazembe of DRC (1591) and Esperance of Tunisia (1584) as a fluke. Ironically, Simba occupies seat number 326, but have proved that it is not a side that can easily be taken for a ride.

It reminds some of us of the good old days when the team had players who were skilled, confident and determined, and who always entered the pitch in search of victory and not for a defensive game. Leave the CAF calculations aside, but it is not strange for some of the Tanzanian clubs to make wonders or defy all prediction results in African soccer.

This is especially so for Young Africans and Simba, and records testify the will power and high fighting spirit of our clubs. What we saw in Dar es Salaam last Tuesday was history repeating itself, and Tanzanians are now looking forward to another chapter of history to be repeated.

If their predecessors managed to climb up the ladder and reputed as one of the soccer giants south of the Sahara, why can’t they also do it? Perhaps it is better to remind ourselves of at least one chapter of our history. In the 1979 African club championship series, Simba thrashed 4-0 in the first leg match in Dar es but pulled an impressive 5-0 victory in Zambia with three goals from Thuwein Ali and two by George Kulagwa. Its coach was the late Joel Bendera.

The players arrived in Zambia just two days before the match, exhausted after a tedious trip by the Tazara train to Lusaka, and later travelled by bus to Kitwe, and yet they managed to do what many soccer pundits didn’t expect.

After last Tuesday’s match, Simba has moved to the second spot with six points, one behind leaders Al Ahly, followed by JS Soura of Algeria (5) and AS Vita of DRC (4). All the four teams have played four matches and have in store two others for two top teams to qualify for the quarterfinals.

While there is every reason for Tanzanians and especially Simba fans to rejoice, it will be a big mistake for Simba players to relax and be satisfied with what they have achieved. They have to look for mistakes they made in their away matches in Congo and Egypt and rectify them so that they can be able to be able to qualify for the next stage of the tournament.

Losing a home or an away match isn’t a crime in soccer, but the way they lost the away games in Congo and Egypt certainly demands an inquest. But this shouldn’t be made with the aim of looking for anyone to blame, but rather how best to avoid repeating the mistakes. Remember to err is human.

Unlike the way they played in other matches, the Simba players during their away matches against Al Ahly and AS Vita looked slothful and lacked ideas, passion, and stamina. They allowed themselves to be reduced to novices. The was not alert in both matches, as if he was not following the game. But generally, Simba poor all across the pitch. I am convinced that there was no reason to lose in the manner they did in Congo and Egypt.

However, it will be a mistake if Simba players continue to be haunted by the two humiliations of 5-0. They should now do all they can to concentrate on preparing for the remaining two group games. Well done Simba for the splendid recovery, but remember, there is still much to be done in order to be able to snatch the golden ticket for the next stage of the competition.

The motto should be, it can be done as long as each player in and out of the pitch play their part. Good luck Simba, and all the best.