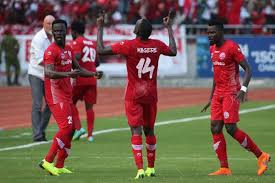 Simba will need to register positive results at the Borg Arab Stadium, to restore their fans’ hope, following a 5-0 thrashing at the hands of AS Vita of Congo DR in two in Kinshasa some two weeks ago. Patrick Aussems charges traveled to Egypt early, so as to acclimatise with chilly weather condition in Alexandria. Kick-off takes place at 19:00 GMT (22 hours EAT).

The Msimbazi Street lads need to put aside their previous results aside and focus on how they could contain their opponents to ensure they post positive results.

With an exception of Hussein, who is reportedly to have picked a knock and is likely to be replaced by Ghanaian Asante Kwasi, Simba defensive shape is likely to remain the same, protecting goalkeeper, Aishi .

The back four will certainly need to keep high level of concentration throughout the game and avoid laxity so as to put at bay Ahly’s strikers Salah Mohsen, Amro El Sulaya, Tunisian Ali Maaloul and Nigerian-import Junior Ajay.

Simba’s striking force has received a major boost with the return of skipper, John Bocco, who missed Vita’s match due to injury. The lanky striker will link up with Ugandan ace Emmanuel Okwi and Meddie Kagere and they must ensure they execute well their task by giving hard time to their opponents’ defence.

Speaking about the match, Simba Belgian tactician, Aussems has piled praise on the Egyptian side alias the Red Castle as a tough side to face.

Al Ahly is under the tutelage of Uruguayan tactician, Martin Lasarte. Aussems said his side is aware that they are going to face the best team in continent.

Al Ahly won eight Champions League titles. However, he said that coaches know how to stop Al Ahly and cause them problems but what matters is all about the execution of plans.

Despite commending his opponents, Aussems said he is confident that his side will not make it an easy game for their opponents on the pitch. However, he said to get positive results, will come down to the extent of how his players will execute his plan.

Skipper, Bocco said the group was still open to all teams and the results of the third round would help to give a clear picture on the direction of the teams. It will be the second time both sides lock horns in a CAF competition.

Thirty-four years ago, they met in the 1985 African Cup Winners’ Cup second round. Simba won 2-1 at the CCM Kirumba Stadium in Mwanza before Ahly guaranteed an aggregate win with a 2-0 victory in Cairo.

They fought back to score a late away equalizer against Algeria’s debutants JS Saoura to raise their tally to four points and go top of the tough looking Group D.

On the other hand, Simba launched their comeback to the group stage after a 15-year hiatus with a home 3-0 win over JS but fell heavily 5-0 to AS Vita in Kinshasa.

Senegalese referees will be in charge of the game. They are Maguette Ndiaye, who will be the central referee and will be assisted by Djibril Camara and El Hadji Malick Samba, while the fourth official will be Daouda Gueye.

To add more salt, new recruits Ramadhan Sobhi, Yasser Ibrahim and Hamdy Fathy will also miss the clash due to the same reason.

The Egyptian Football Association (EFA) revealed that they received security clearance for 10,000 fans to attend Al Ahly, Simba clash. Meanwhile, AS Vita will try to continue their winning ways when they entertain JS Saoura in Kinshasa early on today.