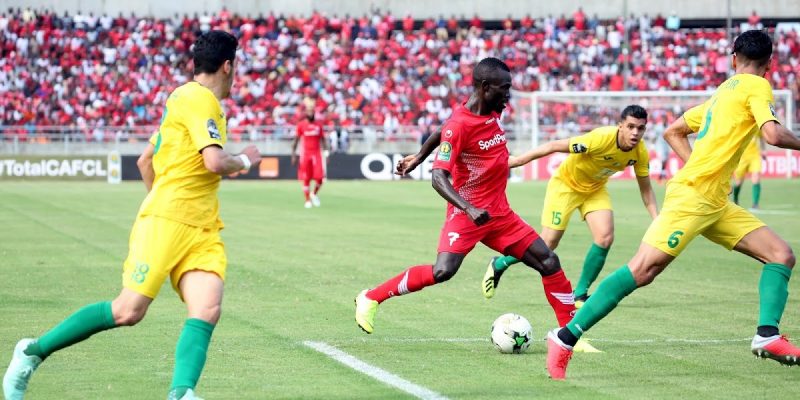 Simba Sports Club on Tuesday this week lived to their vow when they beat the Egyptian giants, Al Ahly by one goal to nil in the return leg played at the National Stadium in Dar es Salaam.

This is actually the second time that Simba have beaten the Egyptians the first time was in Mwanza in early 1985 when they won by 2-1.

And, in terms of defeats, the five goals to nil registered by Al Ahly in Alexandria against Simba over two weeks ago was the heaviest Simba have suffered against the Egyptian giants as in the last matches away from home Simba was beaten by less than three goals.

What was however, quite interesting about the Tuesday’s encounter between Simba and the Egyptians were the frantic gestures made by members of Al Ahly’s technical bench in the last 15 minutes of the match when they complained over what they considered to be ‘Simba’s attempts’ to waste time whenever any of their players were injured.

The interesting part about those frantic gestures is what the SuperSport commentators were saying whenever a Simba player was injured and appeared, in the Egyptians’ eyes, to be wasting time.

The commentators said: ‘The Egyptians are being given their own medicine…this is what they do, back home in Alexandria whenever they play against African teams and when they are ahead in the game….they always come up with all kind of delaying tactics; and whenever any of their players are injured, they always make a meal of it.

Indeed, we all remember Al Ahly’s right winger did when he was stopped in his tracks by Vita’s right fullback in Alexandria.

He made a meal of the incident, forcing the Tunisian referee to award an unwarranted red card against the Congolese defender.

Last Tuesday, Simba missed many scoring chances that could have given them the same score margin that was inflicted on them three weeks ago by the Egyptians.

In fact, just before Meddie Kagere scored the all-important goal of the match, the commentators said; ‘If Simba can play with calmness, they can win this match by more than one goal.

Indeed, no sooner had the commentators said what they said, then Kagere scored the lone goal of the match. Simba have a problem which their coach, Patrick Aussem need to look into, and that is, he needs to look into a more versatile forward who can make use of passes from Kagere and Emmanuel Okwi.

Many, critical passes sent in by both Kagere and Okwi could not be utilized by John Bocco much as the assist for the goal would later come from Bocco.

Had Simba settled on that day, Al Ahly would have received a defeat of their life. I still strongly believe that Simba’s conditioning for these kind of matches still leave a lot to be desired, hence the need for the technical bench to work on that.

As I have said time and again in the past, Simba’s technical bench need to work on their team’s four magical S; speed, suppleness, strength, stamina.

I was impressed by the way they played from the midfield to the goalkeeper. But the forward line to coordinate better than they did on Tuesday if they want to finish their two last matches against AS Vita and JS Saoura in a better note.

Last time I said matches which were likely to decide Simba’s fate in the group stages of the Champions League were two; against Al Ahly last Tuesday, which they succeeded, and the forthcoming match against the Algerians whom they had beaten by three goals to nil.

My argument last time was that for Simba to qualify for the quarter-final of the tournament they need to win all their three home matches and win or at least draw in one match away from home.

Since they have already beaten Saoura, they should not allow, under any circumstances, to lose against the Algerians when they play against them in Algiers two weeks from today.

But again, they can only do that if they have worked thoroughly on their strength, speed, suppleness, and stamina. For although they had beaten the Algerians by three goals to nil, Simba need to know that this is the second team in the group that could not be beaten away from home.

Yes, the Algerians drew against AS Vita in Kinshasa and in the return leg played in Algiers on Tuesday this week, the Algerians beat Vita by one goal to nil in the same way Simba had done to the Egyptians in Dar es Salaam.

The other team which could not be beaten away from home is Al Ahly who played a one all draw against the Algerians. It is therefore extremely important for Simba to note that much as they had beaten the Algerians by three goals to nil, but JS Saoura tough customers who could easily turn the tables against Simba in Algiers, hence the need for Simba to prepare themselves better than ever before.

To me, the Algerians could be the strongest side in the group and I will not be surprised if they win the group.

Simba needs to work on their weaknesses which include among others, lack of concentration, especially in the first half of the match.

In fact, whoever had the opportunity of watching Simba on Tuesday would note that after the first seven minutes of the match, twice Simba almost conceded a goal from the Egyptians! It is this monumental lack of concentration which twice cost Simba in Kinshasa and in Alexandria against Vita and Al Ahly.

Simba can only beat the Algerians if they quickly close down on their opponents whenever they have the ball. It is important for Simba to do well against the Algerians in order to reduce pressure on their last game, on March 16th against Vita at the National Stadium in Dar es Salaam. We wish them all the best.