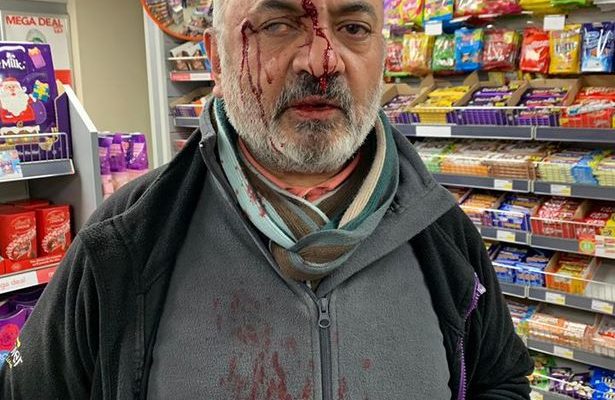 Tabora born businessman Jimmy Morat, after the attack at his store

residents of Birkenhead, Liverpool, are digging deep in their pockets to donate money to Tabora born businessman Jimmy Morat, who was attacked brutally in his shop, Dock Convenience Store, at evening closing time on December 22, last year.

Moved and shocked by the video images of the attack and Mr. Morar’s blood soaked face, 23 year old Miss Phoebe Astrid and four supporters took to the social media to appeal to fellow residents to donate cash.

“We are raising money to help out a man attacked for no reason and our campaign would go to other parts of the country,” she said.

Mr. Morar put the video of the attack on the social media and it has been seen and shared by more than 2,000 people throughout the UK.

Speaking in an exclusive interview, Mr. Morar told me that he was overwhelmed by the gesture of the local community.

“People have been so touched by what happened. Everyday, since the arrack, my regular customers and strangers come to see me and assure me of their support and that I should not feel alone”.

He said they assured him that not all white people are racists or prejudiced.

“I am very touched when they say I am a member of Birkerhead town’s community. People have come from all over Liverpool giving me sympathy cards. Their gesture moves me as one of them told me: “You have been serving the community for the past many years.”

Locals have paid tribute to Mr. Morar for working long hours, seven days a week at the service of the local community from his Convenience Store.

Mr. Morar said that he will double the amount of whatever the money raised by the local community and had it over to Wirral Hospice Charity which does excellent work of looking after seniour citizens.

Local race relations groups in liverpool have also stepped in to take up Mr. Morar’s case and hold several meetings with the Police in search of an expendited hearing.

He ramains in the Wirrall Adult Remand Centre untill his appearance in the court.

Two juveniles, who accompanied Devlin and were in the shop at the time of the attack were also arrested and released pending investigations.