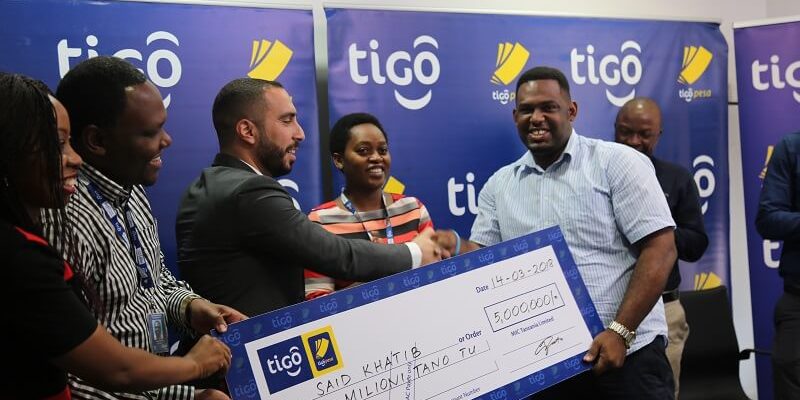 An ambitious Zanzibar based Tigo Pesa agent, Saidi Issa Khatib targets to reach over 2bn/- in monthly transactions by end this year from his current 1.3bn/-.

Khatib who is also the winner of numerous Tigo Pesa awards totalling over 15m/- in the past five years, said he started off with a borrowed line from his neighbour.

Khatib who is one of the over 100,000 Tigo Pesa Wakalas in the country, sees a bright future in the company’s mobile money business after managing to get his own Tigo Pesa line.

“I used her number for sometime while saving money to obtain my own line. I used to give her 70 percent of daily earnings while I got 30 percent,” the father of three said while pointing out that her future plan is to be Zanzibar’s super dealer for the fastest growing mobile phone service companies.

Tigo Tanzania and its mobile money platform remains a dominant player in the market with its 7.5 million subscribers who transact billions of shillings per day.

According to Tanzania Communication Regulatory Authority (TCRA) latest report, it indicated that the country’s six major mobile money operators had a total of 20,895,572 subscribers as of September 2018, which was up from 20,855,164 registered by end of June 2018.

Tigo Tanzania which has invested over U$ 200m in infrastructure upgrade from 3G to 4G network in most parts of the country, believes that mobile money remains the main driver of future growth.

“Customers find it convenient to use our products such as Tigo Pesa and the Tigo Pesa App that is linked to 50 banks to make their daily transactions,” said Tigo’s Chief Commercial Officer, Tarik Boudiaf during a recent interview.  He added, ”They continue to choose us as their reliable service provider because we make it digitally quick and easy.”

TigoPesa application which was launched earlier this year has also proven to be a rapidly adopted product by the tech savvy generation because it can perform almost all the functions at finger tip length.

Launched in 2010, Tigo Pesa has grown from simply providing remittance services, payments of different bills, paying for products and services at merchant sales points to a platform that enhances financial inclusion in Tanzania.

In 2014, Tigo Pesa was successful in launching a few first in world services and products, including; interoperability with other mobile money operators and commercial banks, a service which enables mobile money users to send money to and from other operators directly into their wallets seamlessly.

The mobile money platform has continued its spirit of leading in innovation, adding to its portfolio different products such as; loans, insurance, corporate solutions for collections and disbursements, where companies can disburse directly to wallets of all other players (interoperability bulk disbursement).