Zanzibar formerly known as the Sultanate of Zanzibar before gaining independence on December 10, 1963, Zanzibar government Joined Tanganyika (Tanzania Mainland) to form the United Republic of Tanzania on 26 April 1994.

Zanzibar is an Island combination of two Islands namely; Unguja Island and Pemba Island located on the East Coast of Africa (Swahili Coast). Zanzibar is well known for beautiful beaches, coral reef, and kind people as they are one of the most welcoming people in Africa.

There are two major ways on how to get to Zanzibar, which is by Sea or by Air.

There are 2 major companies that provide sea ferries that depart from Dar es Salaam to Zanzibar City and vice versa.

1) The first Company is Azam Marine which has a fleet of 8 vessels with a speed range from 25 knots up to 58 knots allowing passengers to be in Zanzibar from Dar es Salaam within 1 hour and 40 minutes.

2) On the Other hand, The second company is located next to Azam Marines offices in Dar es Salaam. They have one vessel called Flying Horse which is relatively cheaper compare to Azam Marine and It is the best option for those who are on a budget. 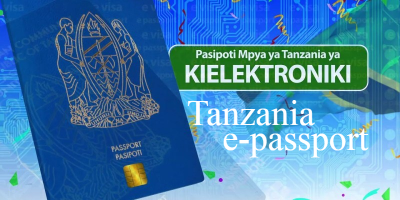 How to apply e-passport Tanzania – (Step by step)

E-passport also is known as a biometric passport, is a traditional passport that has a microchip that ...
Travel