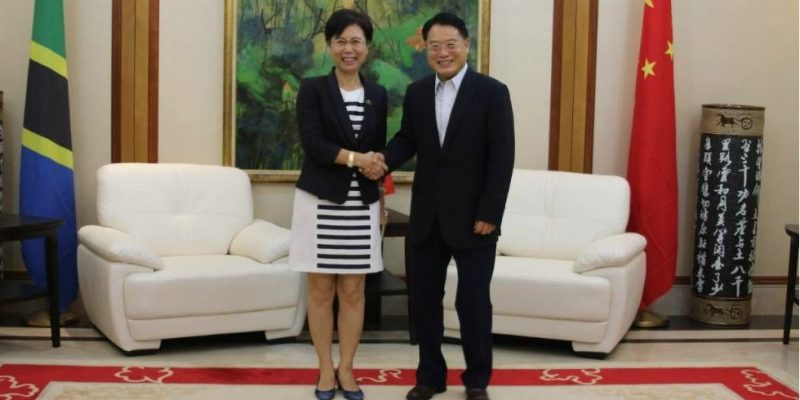 Chinese Embassy in Tanzania has handed over a modern toilet worth about 32m/- to Msinga Primary School in Moshi Rural District after completing its construction which was funded by Chinese friends through the embassy.

The toilet building with 16 rooms also includes also a room for pupils with special needs. Chinese Ambassador to Tanzania, Wang Ke said financing was done under the ‘Rafiki Project’, adding that after completion, the project will create conducive learning environment as well as good health for the pupils.

Ambassador Ke said the school was opening a new chapter, getting away with the dilapidated toilets that were dangerous to the health and even lives of the children and the surrounding community.

She said that female pupils were exposed to the most dangerous situation, but hoped the best for them now.

“I am so happy that after eight months from the day we got the idea of this project, we have managed to complete and hand over the facility to the stakeholders. I congratulate all of you for this and also for the good news I hear that academic performance is about 100 percent for students joining secondary schools from Msinga Primary School; this is good news,” she said.

The Acting Kilimanjaro Regional Commissioner (RC), Mr. Kippi Warioba who is also the Moshi District Commissioner (DC), said that stakeholders have the responsibility to safeguard the project and use it properly as well as making plans for future rehabilitation instead of waiting until the infrastructure is damaged or looking for aid. He said that teachers have the responsibility to ensure pupils make good use of the modern toilet.

Mr. Warioba said that Moshi District Council will provide 20 percent of the annual income for the construction of a teachers’ toilet, and congratulated the teachers and local residents for offering cooperation without any complaint.

The Acting Deputy Director, Department of Finance, Planning and Administration at the Centre for Foreign, Relations (CFR), Ambassador Innocent Shiyo who is the alumnus of Msinga Primary School and who advocated for raising of the funds from the Chinese friends, said there was some amount that remained after construction and that it will be used to build a teachers’ toilet, and that the alumni of the school will continue with donations so that they could buy a 5,000 capacity water tank to facilitate use of the modern toilets.

Msinga Primary School pupils, Maria Ernest and Joseph Thomas said they were delighted after the construction, adding that it was difficult for them to use the dilapidated toilets, saying that they had to go and wash their hands in the kitchen after using the toilet.

Maria felt more relief for kindergarten students, saying they can comfortably visit the toilets as opposed to before, as the dilapidated ones were so dirty and inconvenient for use.

The Head Teacher of the school, Ms. Pancrasia Tesha thanked the Embassy and Ambassador Shiyo but was swift to add that the school is still faced with some challenges, including lack of a dining hall, and a verandah for students to shelter during rainy seasons.