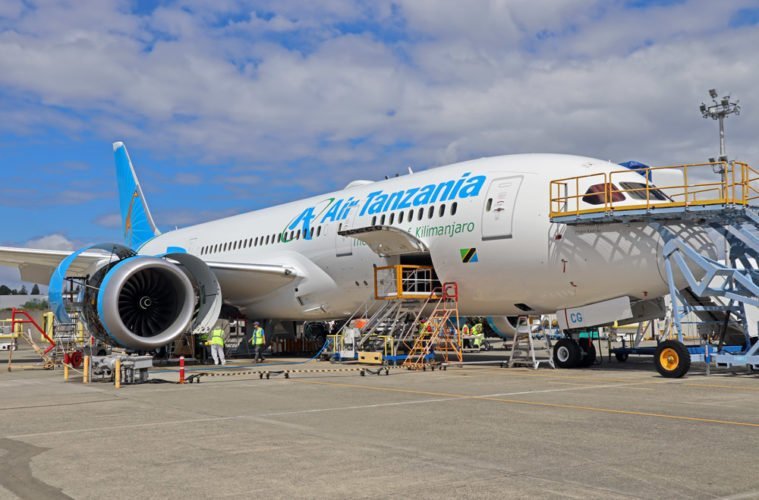 After successfully completing all standard ground and flight tests, Boeing on Sunday, July 8 handed over the first 787-8 to Air Tanzania at the Julius Nyerere International Airport (JNIA) in Dar es Salaam.

The aircraft, registered 5H-TCG and named Kilimanjaro-Hapa kazi Tu, touched down at JNIA at 5.18 pm after departing Seattle and stopping to refuel in Europe.

Onboard the $224.6 worth aircraft were the Boeing and Rolls-Royce executives to meet President John Magufuli at JNIA. After touching down, the plane received a water salute from two firefighter engines rigs spray arcs of water as a sign of respect, honor and gratitude.

The Rolls-Royce Trent 1000 TEN engines installed are the latest revision of the Trent 1000 family and offer customers a 3 percent lower fuel burn compared to the competing engine. Rolls-Royce is confident that the engine will offer Air Tanzania efficient and quiet operations.

Air Tanzania has configured it to accommodate 262 passengers with a Business class in 2 + 2 + 2 and Economy class in 3 + 3 + 3. The plane will first be deployed to Kilimanjaro for crew training, before flying to Mumbai, India as early as September then to Bangkok, Thailand, and Guangzhou, China. The 787 joins a fleet of three 76-seater Bombardier Q400 valued at $32 million each and a 50-seater Q300.

The future is bright for the carrier as their fleet strategy comes into action. The Boeing 787 is an excellent aircraft, offering customers a comfortable cabin and the airline efficient operation.

The reduced operating cost will benefit the carrier as they progress in becoming a stronger player in the region. As debts are paid off and operations are smoothed out, Air Tanzania can expect an increase in customer and freight traffic.

Boeing delivered a 787-8 Dreamliner to Air Tanzania as part of the airline’s plan to grow its operations across Africa as well as to international destinations. The brand new 787 is the first widebody airplane to join Tanzania’s flag carrier’s fleet.

“We are very proud to take delivery of this Boeing 787 Dreamliner,” said Ladislaus Matindi, Air Tanzania’s CEO. “We believe this is the perfect aircraft to realize our ambition to connect with the rest of the world through the initiation of intercontinental flights. I am delighted to be here today with Boeing and Rolls-Royce to celebrate this important milestone.”

The Boeing 787 Dreamliner is an all-new, super-efficient family of commercial airplanes, which allows airlines to profitably open new routes so passengers can travel directly to their destinations and in exceptional comfort.

Since 2011, more than 690 Dreamliners have entered service, flying more than 255 million people, saving an estimated 25 billion pounds of fuel. The Dreamliner family has helped open more than 180 new nonstop routes around the world.

“We are honored that Air Tanzania selected the 787 Dreamliner to expand its long-haul operations within Africa as well as internationally,” said Marty Bentrott, Boeing Sales vice president for the Middle East, Turkey, Russia, Central Asia and Africa.

“The Dreamliner’s unmatched combination of superior fuel efficiency and range makes it extremely flexible and will fit well into Air Tanzania’s operations. We are confident the 787 will boost passenger traffic and tourism in and out of Tanzania.”

Air Tanzania is based in Dar es Salaam with its hub at the JNIA. The carrier currently flies to destinations across the region and plans to embark upon intercontinental flights by the end of this year.

Revived barely two years ago, Air Tanzania seeks to play a bigger role in the regional African aviation market, which is dominated by Ethiopia, Kenya, and Rwanda.

The plane will now see Air Tanzania start operating intercontinental routes to Mumbai starting in September. Two weeks ago, the airlines’ Commercial and Business Development Director Patrick Ndekana said the aircraft will fly to Mumbai three times a week, its first flight outside the continent. In March, Air Tanzania said that the 787 Dreamliner will be its flagship aircraft as it renews and growing its fleet.

The fleet improvement programme includes the purchase of six aircraft including three Bombardier DASH8 Q400s two of which were delivered in September 2016 and which are now used for its domestic routes between Dar es Salaam, Mbeya, Dodoma, Mwanza, Tabora, Kigoma, Mtwara, Zanzibar, Bukobaand Songea.

Two years ago, Tanzania decided to develop a programme for revamping its national carrier, which included buying six new aircraft between 2016 and 2018, payment of debts and provision of start-up capital, improvement and modernization of business systems.