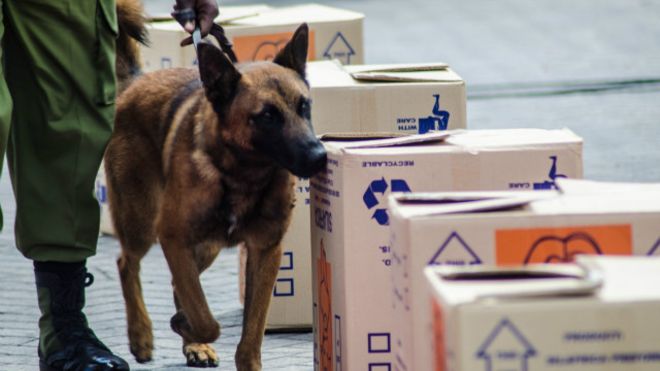 A detection dog or sniffer dog is a dog that is trained to use its senses to detect illegal substances.

The Commissioner General of Tanzania Revenue Authority (TRA Mr Charles Kicheere, has warned that if severe measures are not taken to end the black market in the country, it may obstruct the government’s initiatives towards industrialization.

Kicheere gave the warning in Moshi recently during the occasion to hand over 52 motorcycles donated by TRA to the police force in Kilimanjaro Region, which seized and confiscated by the authority in its operations against illegal trading and tax evasion.

“Illegal trading, especially the black market, will make people buy items smuggled into the country at the expense of locally manufactured goods. This will hinder President John Magufuli and the Fifth Phase Government’s efforts to make Tanzania an industrial nation,” he said.

He added that apart from affecting the economy, the black market would also affect the health of Tanzanians because goods that enter the country illegally are not checked by the Tanzania Foods and Drugs Authority (TFDA), which made people eat food and take medicine that has not been checked and certified by relevant government authorities.

Commenting on the success of the ongoing operations, which he said were sustainable, Kicheere said the authority was able to seize and confiscated goods worth Tsh 2.9 billion in Kilimanjaro Region during 2017/2018.

“During the period, we were also able to seize and confiscate food and medicinal drugs worth Sh59 million and which were unfit for human consumption.

This means if these goods could penetrate and reach the people, they would use them something which would affect their health’s status dearly”, he said.

Mr. Kicheere continued to say that during the period, TRA in Kilimanjaro Region accrued a total of Tsh. 758 million as fines imposed on goods, which were brought to the country illegally and that also a total of 36 vehicles and 15 motorcycles were seized and confiscated during the period.

He appealed to traders to avoid black market businesses which he said would not benefit them and instead it would make them enter a blacklist of traders who are haunted by government authorities for ruining the economy of the nation.

In a speech read on her behalf by the Rombo District Commissioner, Ms. Agnes Hokororo, the Kilimanjaro Regional Commissioner, Anna Mghwira, hailed the TRA for working around the clock to fight black market the region.

“As you know very well, the government is now implementing many projects, which need a lot of money to succeed in this endeavor.

What you are doing in curbing illegal trading will enable the government to get its rightful revenue, which would help it succeed in implementing these projects”, she said.

The Kilimanjaro Regional Police Commander, Khamis Issa, thanked the TRA for donating the motorcycles to the force, saying the move went on to show that TRA appreciated the co-operation provided by the police in the fight against.