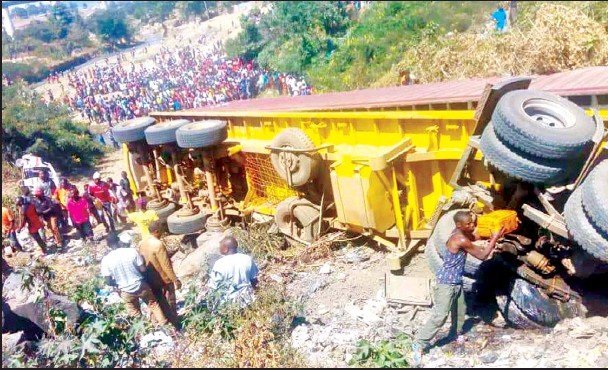 Barely a week after a horrific accident brought Mbeya Region to a halt, claiming 20 lives and injuring 45 others, the ghost has hit again in almost the same style as the previous one, claiming five more lives, leaving one hospitalized.

The road carnage occurred on Thursday at Igawilo slope in Mbeya District when a haulage truck which was heading to Mbeya Town from Kasumulu Border in Kyela District hit three cars before overturning and crashing one of the vehicles.

According to reports, the brakes of the truck failed, resulting in it losing control and hitting two vehicles belonging to Coca-Cola Company and Tanzania Electric Supply Company (Tanesco) which were heading to Kyela before it overturned, crashing a Toyota Noah which was heading to Mbeya killing two people in the vehicle.

The other three who died were in the haulage truck, including the driver and his passengers. An eye witness said the accident occurred after the semitrailer hit the two vehicles and lost control before crashing the Noah.

Speaking at the scene, the Mbeya Regional Commissioner, Mr. Amos Makalla said they are organizing a joint meeting with religious leaders and elders in the region to see how the accidents can be contained including holding prayers to free the region from recurrent accidents.

Minister for Works, Transport and Communications, Eng Isack Kamwelwe said from now onwards all imported vehicles will be inspected to find out if they are in good condition and suitable to be used in the country.

Eng Kamwelwe said he will also contact the Minister for Home Affairs so that there will be an operation of inspecting all vehicles in the country believing that the measures will reduce road accidents.

The accident occurred a day after the Minister for Home Affairs, Mr. Kangi Lugola directed IGP to take measures against Regional Traffic Officers (RTO’s) whose regions lead in road accidents that cause death.

At least 20 people died and 45 others suffered injuries in a road accident last Sunday that involved a lorry and three minibusses.

The terrifying accident occurred at Iwambi slope near Mbalizi Township along the Mbeya-Tunduma highway after a 40-feet container lorry rammed into minibusses in which the deceased and injured were traveling in.