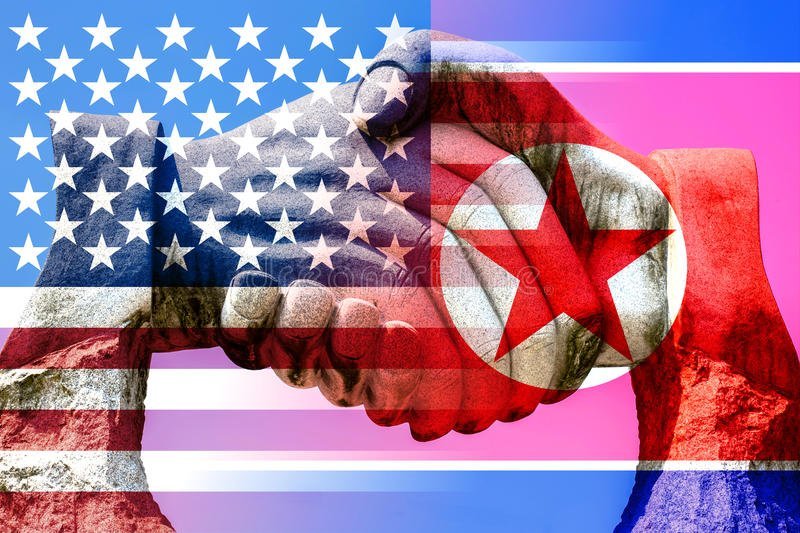 Peace between the US and North Korea

As another monumental change in global strategic realities unfolded before the world’s public and media, a massive silence of that change, as radical activist sought to imprint that event as kindred to their own aspirations, instead of signaling their real failures.

While it was not an issue that the new understanding in the Korean Peninsular is a massive improvement for peace prospects not just in the Far East but the world as a whole, taking credit for the change become a major issue.

And what was interesting, it was actually played out in its silence, the massive lack of interest to attribute the change, as the winner is obvious.

The psychological reality is that analysts in the United States and elsewhere in the world, averse at anything that has to do with praising US President Donald Trump, are seeking to find caveats to avoid making reference to his methods in bringing about not the ‘thaw’ in Korea but potentially total obliteration of the nuclear missiles crisis.

It was a massive volte-face, huge turnabout by the youthful North Korean supreme leader (many would simply say despot) Kim Jong-un, starting to rill the ball as the Winter Olympics were lighted in South Korea.

He sent his sister, who is also a bead of the propaganda unit of the party security apparatus in the hermit state, to talk to top leaders in the rival sister state, with no doubt what his intentions are.

This initiative was followed up by another, less surprising but also not a quite in the ordinary run of things, a visit by Kim Jong-un to Beijing, for talks with the President Xi Jinping, with analysts especially in the United States of America seeking to affirm a huge role for China in the precipitate path towards total denuclearization of the peninsula.

A conspiracy was building up for the peace initiative interpretation of the run of things, somewhat contrary to wisdom accumulated on the reclusive state to the north of the 38th parallel really all the time since 1958.

But to avoid accepting that it was a victory for the method chosen by the United State president, what else could they but to credit China for the changes and insist on Korean brotherhood as a peace clincher?

The trouble with these two lines of thinking is that they cannot state what in actual fact brought about a specific event, a change of mind about nuclear tests and missiles’ range as the kingpin of North Korea foreign policy, it is strategic position and sense of dignity.

Just how did the iron-fisted ruler, known for the series of executions of real and imagined critics, poisoning a stepbrother (western media talk of half-brother) to avoid there being the semblance of an alternative within the communist royal family, shifty to sue for pace, more or less immediately, and plausibly, totally?

This is yet to be settled down in reality, the terms of ending the war situation dating from 1953, and procedures for dismantling nuclear test sites and silos, but there is no doubt as Kim’s specific intention and thrust of policy at the moment.

While ‘peaceniks’ were sweating with theorems about the vitality of Koreans brotherhood and common future, not to speak of common fate, as well as the huge role of China in the ‘thaw’, that is, not change as yet but relaxation of tensions, implying presumably that a long road lies ahead to be travelled, in like manner as the Iran nuclear deal.

Nothing of the sort was visible on the ground fo no preliminary talks of any sort preceded the change of outlook on the part of the North Korean leader, but confrontation with the US that ‘peace links’ were attributing to the US president’s style of making foreign policy on Twitter, insulting the North Korean ruler, and this had to stop…

The more intriguing question on the whole issue of Korean brotherhood and that sense, a primary role of China – the decade-long darling  of left liberals around the world – is that these tenets do not explain the moment in which the ‘thraw’ as they want or wish it is thus comprehended, but something close to total surrender.

The ‘surrender’ that is at issue is the presumed right and necessity to hold nuclear weapons, that the West and especially the United States ought to respect that situation as part of North Korean sovereign state tights, etc.

Similarly, the decade-long position where North Korea preferred to treat with the US as equals while studiously ignoring the rival sister state lay in ruins, and everything was first cleared with Seoul, including a real peace intention, before anything was credibly started with Washington =, as Kim understood where Trump stands.

If ‘peace links’ and left liberals wanted anything to demonstrate their thesis was false and only realism explains the situation, it was from Kim himself that the key argument came.

He told a press conference on the sidelines of meeting South Koreans President Moon Jae-in that he did not wish to be another Saddam Hussein or another Muammar Gaddafi, which means he plainly knows what comes about when a country maintains a belligerent or hostile and destabilizing attitude that the US decides to confort.

It is not a matter of who is right and who is wrong, as ‘peace links’ have almost always been on the wrong side, like the Munich agreement of 1938 which bolstered German national socialist ruler Adolf Hitler, that the West will do little or nothing if he takes other states, after they signed up that he takes Austria. This gave him a fresh boost of material and border stretch to launch a war.

Without beating around the bush, the reason Kim Jong-un changed face was that the US had called the bluff and was ready to take him head on first, by starting systematic inspections of all ships entering North Koreans harbors, which amounted to a blockade of sorts.

With that measure, it was clear ther hermit state would no longer be able to continue the sort of clandestine trade it was conducting earlier, while greater scrutiny of states doing commerce with North Korea was ensuring that they abandon the hermit state to avoid falling foul of the United States.

It was in this manner as well that apartheid fell, when 1986 the United States removed export and investment insurance for the US companies operating in South Africa, touching off large outflows of capital fearing risk.